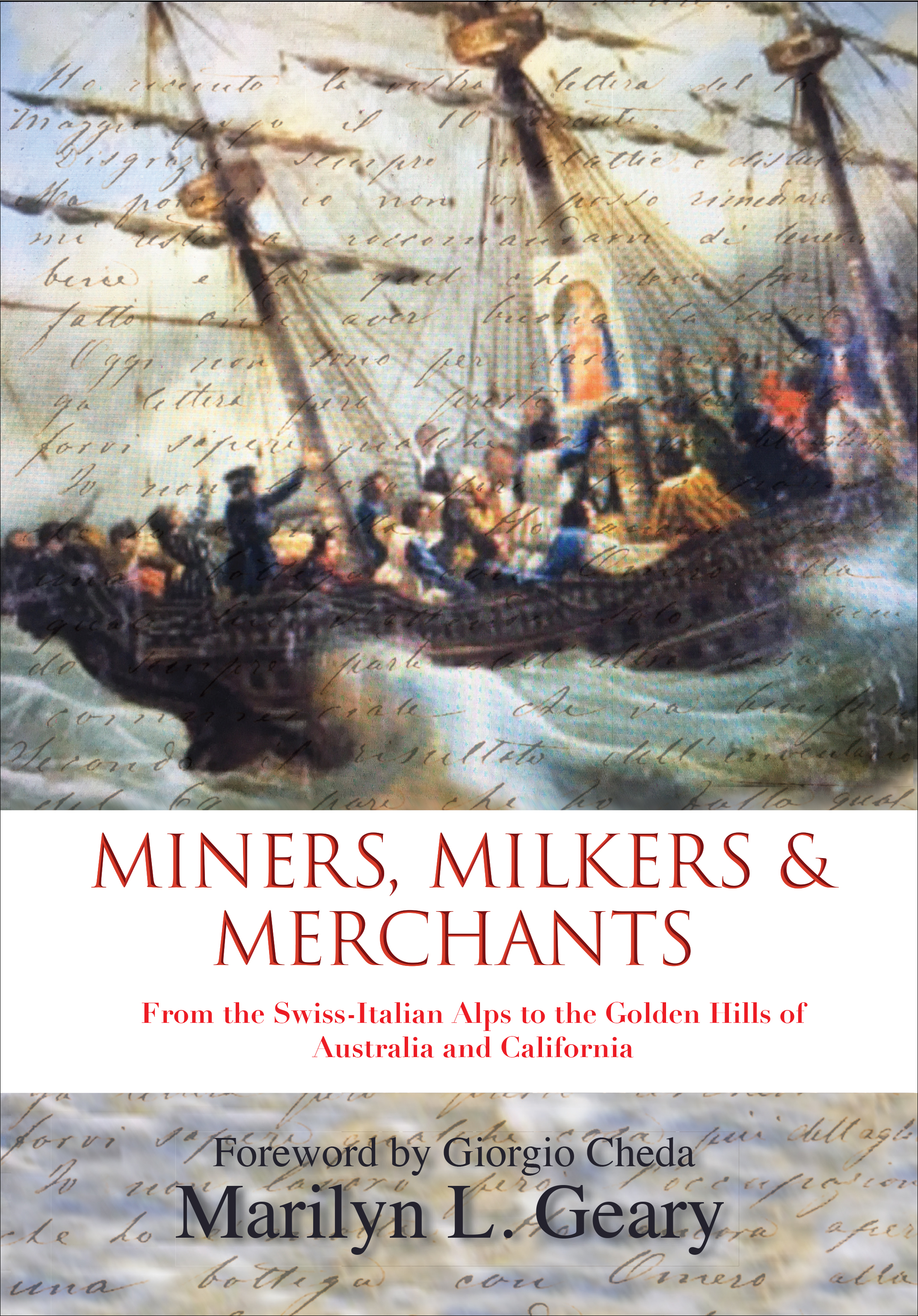 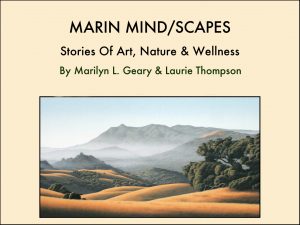 Marin Mind/Scapes : Stories of Art, Nature, and Wellness celebrates Marin County’s natural beauty. In the film, professional and amateur artists speak of their art, their creative process, and how Marin County’s natural beauty has inspired their work and influenced their lives. Some of the artists have been diagnosed with a severe mental illness. All the artists, regardless of background, speak of how creative expression and Marin’s scenic vistas have affected their artwork and their sense of mental well-being. Project Goals: Marin County’s Artistic Heritage
Marin County is a 519-square mile area north of San Francisco Bay with a population of approximately 252,000 people. Urban areas in Marin are located primarily along the Highway 101 corridor. Nearly one third of the county’s population lives in rural, unincorporated areas. 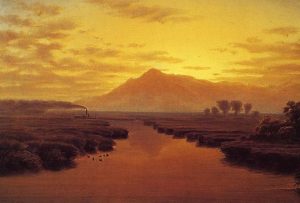 Marin County is renowned for its natural beauty. Scenic sites such as Mount Tamalpais and Muir Woods attract visitors from around the world. Surrounded on three sides by water, Marin encompasses abundant natural resources beautiful and rich in variety. Over 50 percent of Marin County—the highest proportion for any county in the Bay Area—is protected open space. Protection of the natural environment provides inspiration for many forms of art and has historically provided the basis for significant cultural artistic expression. Plein air and landscape artists, in particular, have been drawn to Marin’s natural beauty. Historically, Marin has been home to many notable landscape painters, including Thaddeus Welch (1844-1919), Ludmilla Welch (1867-1925), Manuel Valencia (1856-1935), Granville Seymour Redmond (1871-1935), Percy Gray (1869-1952), Gottardo Piazzoni (1872-1945), William Keith (1838-1911), and Ray Strong (1905-2006). This artistic heritage is alive today in the sizable group of artists who depict Marin’s landscape in their works. These artists are active in a number of annual art shows in Marin County: Marin/Scapes, the MALT-Marin Agricultural Trust’s Ranches and Rolling Hills Show, The Marin Art Festival, the Mill Valley Fall Arts Festival, and The Sausalito Art Festival. Many of these landscape artists, such as The BayWood Artists and the Art on the Farm group, contribute to the preservation of Marin’s open space and ranchlands.

Iris Cutler
Iris is a professional plein air landscape artist who recently returned to West Marin from living in Santa Barbara, Califor Charm Dupree
Charm who creates art at the Enterprise Resource Center Saturday Art Group. She practices Tibetan Buddhism and has volunteered painting meditation statues at the Tsa Tsa Studio, a Center for Tibetan Sacred Art. Steve Emery
Steve Emery is a native Marinite with strong ties to the community. He creates small, intimate landscape paintings from scenes he spots on his daily runs through Marin’s open space. He is the 2000 Marin/Scapes poster artist. Byron Griffin
Byron is a Buckelew client who has shown his work in prior Marin/Scape exhibits. He attended California College of Arts and Crafts in Oakland on a scholarship and has taken several art classes at the College of Marin from Jack Scott, who is a member of Buckelew’s Board of Directors. 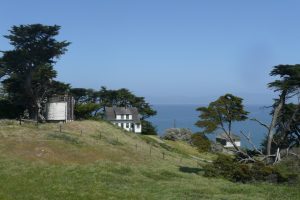 Homa Karimzad
Homa loves creating art with the Enterprise Resource Center Saturday Art Group. Tom Killion
A native of Mill Valley, Tom is a woodcut printmaker whose landscapes are strongly influenced by Japanese woodcuts. His work Pt. Reyes from Double Point is the Marin/Scapes poster for 2006. Kathleen Lipinski
Kathleen received her BA in Fine Art from the University of California, at Santa Cruz, and an AA in Fine Art from the College of Marin. She has been a Marin/Scapes artist from the event’s early beginnings. Her work Mt. Tamalpais from Azalea Hill became the 1992 Marin/Scapes poster. 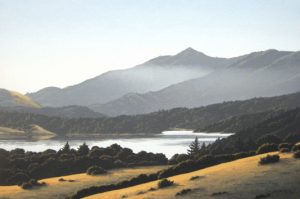 Sherrill Miller
Sherrill is the 2010 Marin/Scapes featured artist. She studied art at UC Berkeley and Bennington College and the Laguna Beach Art Center and Design. She has taught art classes for Buckelew clients and encourages clients to show their work at Marin/Scapes. 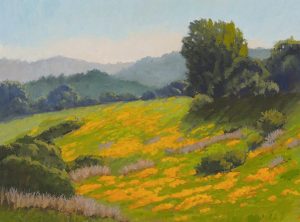 J. Thomas Soltesz
J. Thomas Soltesz is a prolific plein-air painter whose painting of the Angel Island Ferry became the 2007 Marin/Scape poster. He rides his horse through the hills of Marin from his home in Muir Woods to find new landscapes to paint. Matt Tasley
Former Buckelew client Matt Tasley was an accomplished artist with a Master’s in Fine Art from the University of California at Santa Barbara. Matt taught art for the Buckelew Program’s Transitional Age Youth-TAY program. 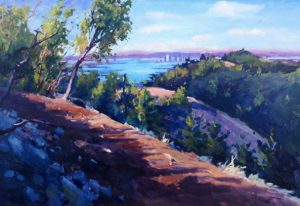 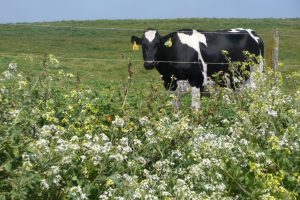 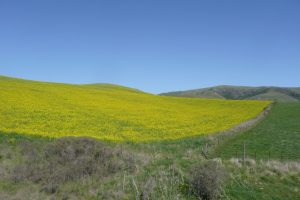 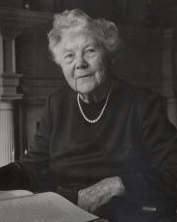 These collaborators worked with me to create Marin Mind/Scapes: Laurie Thompson
Laurie Thompson has been the Librarian for the Anne T. Kent California Room, Marin County Free Library, since the fall of 2001. She received her Master’s of Library Science degree from Columbia University where she specialized in Rare Books and Special Collections. She is the former Director of the Book Department at Butterfield & Butterfield and worked for many years as a rare book cataloguer and appraiser. Laruie initiated the Anne T. Kent California Room Digital Archive as a way of sharing the California Room’s rich repository of photographs, oral histories and primary source materials with researchers everywhere. Carol Acquaviva
Digital Archivist Carol Acquaviva has worked in libraries since 1990. As Digital Archivist, Carol’s responsibilities center on collecting, preserving, and making accessible, local history material, often in digital formats. She was instrumental in developing the California Room’s Digital Archive. Nita Winter
Nita Winter began working for non-profit agencies in 1982 photographing people in projects that promote social justice. With her partner Rob Badgley, Nita has created a stunning book of wildflower photographs: Beauty and the Beast: California Wildflowers and Climate Change. S. Kramer Herzog
Kramer is a videographer who owns his own video production company specializing in documentaries. He is a fourth generation Marinite. His grandfather, Sigfried K. Herzog Sr., son of a pioneer family that settled in San Rafael in 1868, was the second mayor of San Rafael, serving two terms from 1915 to 1919. 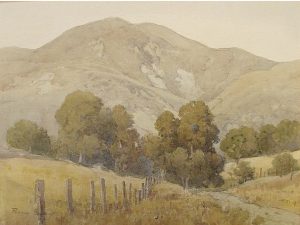